Strecker Laboratory is situated to the east of Renwick Ruins amidst the greenery of Southpoint. Built in 1892, Strecker Memorial Laboratory was the second structure on Roosevelt Island designed by Frederick Clarke Withers.

It was created as the first laboratory in the country devoted exclusively to pathological and bacteriological research. Charity Hospital, later to be called City Hospital was the laboratory's administrative support. In 1907, the Russell Sage Institute of Pathology made Strecker Laboratory its home until 1912 when it moved to Weill Cornell Medical in Manhattan, also becoming associated with Rockefeller University.

Many of the great advances in laboratory sciences of the first half of the 20th century trace their origins to the doctors trained at this institute. Currently, the New York City Transit Authority has refurbished the building's exterior so that it can serve as the power conversion station for the E and V subway lines. 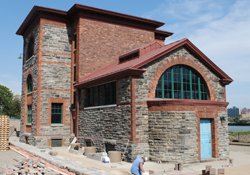