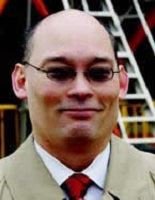 Michael Shinozaki was appointed to serve as a member of the Board of Directors of the Roosevelt Island Operating Corporation from December 2004 to May 2009 by Mayor Michael Bloomberg and Governor George Pataki. He was re-appointed to the Board by Governor Patterson in January of 2010.

He holds dual Bachelor's Degrees in History/International Relations, and an honors BA/MA in Economics / Applied mathematics and a Master's degree in Financial Economics from the City University of New York. He works for Microsoft Corporation for the past 15 years as a Senior Architect in the financial services and government sectors.

His primary areas of specialization are data network communications, security, and data center design and operations. Prior to joining Microsoft he worked for Price Waterhouse, Citigroup, and JPMorgan.

He has lived in New York City since 1986 and on Roosevelt Island since 1991. He is married to Lynne Strong-Shinozaki and has 3 children.

He is an Eagle Scout, a Civil Air Patrol Spaatz Award recipient, and was cited by the American Legion and National Sojourners Society for leadership and military excellence. During the summer of 2010 he had the honor of serving with the US military as a civilian supporting operations in Kabul, Afghanistan.